Pairing music with video is a really exciting process, whether you’re working in animation, advertising, film, television or video games. This step in production usually means that you’re nearing the completion of your project. Perhaps congratulations are in order? Finding the right music for your project is a little tricky, but if you keep a few things in mind and you add a dose of patience, hopefully you’ll get the results you’re looking for.

As a composer and music producer, I interface with a wide variety of folks from a variety of backgrounds who make up my client base. They often have exponentially more experience than I do in art, design, writing and business. They may be a super-talented art director, editor, visionary writer, producer or other type of content creator. No matter what their title is, the job of finding music often falls into the lap of the most creative member or members on the team. In almost every case, everyone on the team has a strong passion for music, and they know from the start exactly what they think will work. Sometimes the hardest part for the team is trying to communicate the musical vision to the person who will be bringing it into fruition. That’s where I come in.

In this article, I am addressing the process of working with a composer to create custom music. I recognize that working with a music library is also a viable option for many creatives – that is a somewhat different process.

From the beginning of the project, it’s my job to open a clear line of communication about what exactly we all want for the music, to determine who the final decision makers are, and to figure out a way to keep things on track.

In the beginning, it’s often helpful to get very granular details by sharing existing examples and quick, messy custom prototypes to really hone in on the right direction. Many projects move fast, and sometimes projects change in the middle, so getting that communication going is important for any tweaks or adjustments that we decide on to get the music working well, as fast as possible.

Once in awhile during the review process, I’ll get feedback such as “It’s not working” or “I don’t like it.” That’s clearly not enough feedback. If that’s all I get, I have to do my best to draw my client out more. I don’t need them to tell me their hopes, fears and dreams, but I do need to figure out what music is going to work, so I don’t throw out the good parts and then I need to figure out what isn’t working with the music, so I can fix it.

Very often my job is to translate emotional terms, narrative structure and thematic elements into music.

Here are 5 recommendations for communicating with a composer:

Pairing music with video is an exciting process. If you have the chance to collaborate with a composer who is a willing partner and good listener, then there is a high likelihood that the composer will take great care with your project – the same amount of great care that you have taken to get it this far.

I received feedback from a longtime client a few years ago. Every week, when I sent over my full orchestrations and the final mixes of my music synced to picture to the audio director, this was usually cause for a small crowd of people who worked on this project to gather around the audio director’s mixing console and watch it, some watching the whole project for the first time. It was only then, and only once the music was synced that the project felt finished. That, to me, is how I know when we have the right music.

Good luck, and let me know how your experience with of communicating with a composer goes!

Jerome Rossen is a composer, songwriter, producer and professional musician. For 18, Jerome has created music for advertising, apps, and kid’s video games. Jerome has placed his music in major TV shows like “The Bachelor” on ABC  and MTV’s “The Challenge”. Jerome also creates the music for the Happy Tree Friends, a very funny (though very violent) cartoon for adults and mature kids, with a huge cult following. He runs Freshmade Music, an independent audio studio. You can learn more at www.freshmademusic.com.

I’ve done a quick analysis of “In Motion” by Trent Reznor and Atticus Ross from the Social Network Soundtrack. You can hear the tracks here: 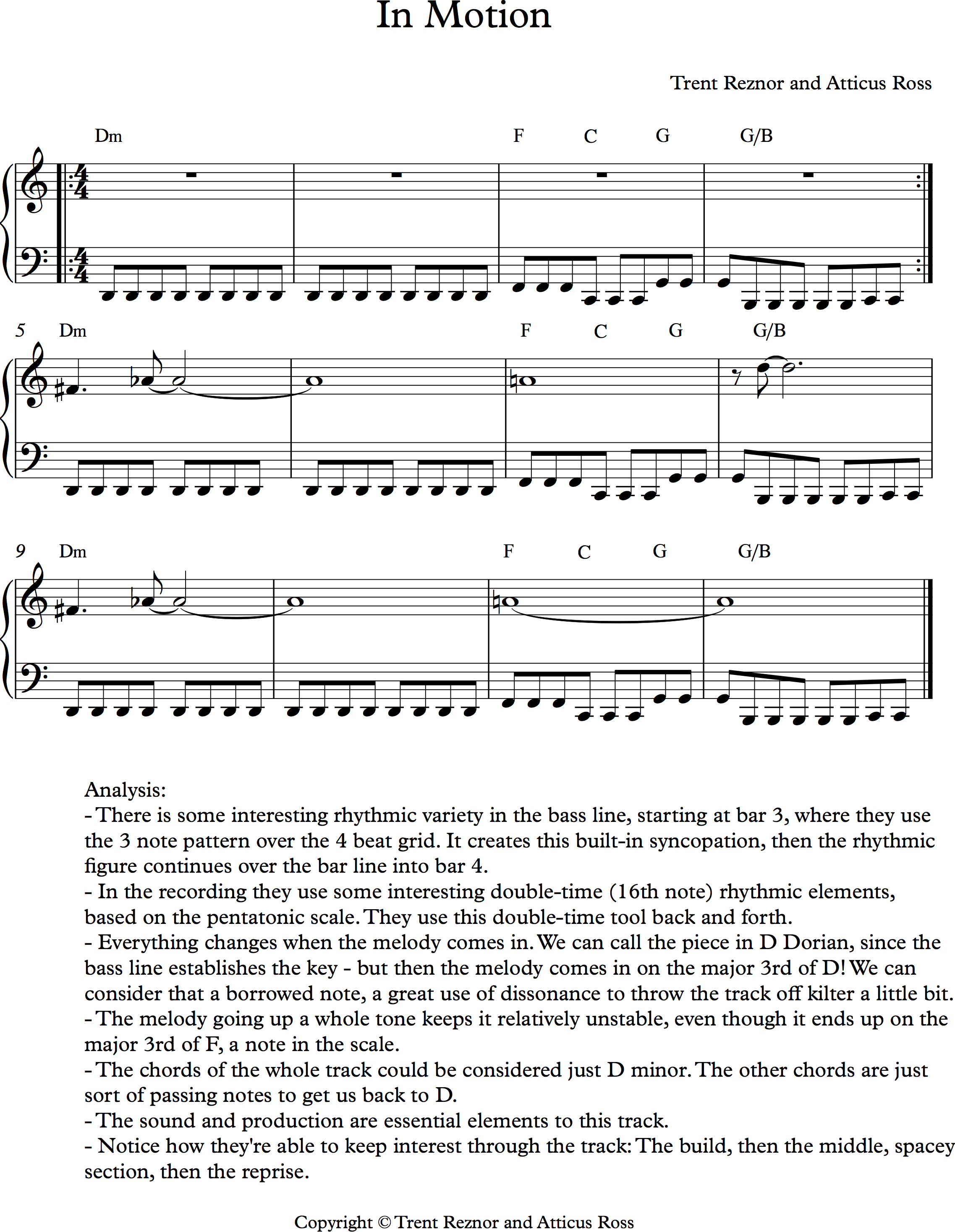 – There is some interesting rhythmic variety in the bass line, starting at bar 3, where they use  the 3 note pattern over the 4 beat grid. It creates this built-in syncopation, then the rhythmic  figure continues over the bar line into bar 4.

– In the recording they use some interesting double-time (16th note) rhythmic elements, based on the pentatonic scale. They use this double-time tool back and forth.

– The melody going up a whole tone keeps it relatively unstable, even though it ends up on the major 3rd of F, a note in the scale.

– The chords of the whole track could be considered just D minor. The other chords are just sort of passing notes to get us back to D.

– The sound and production are essential elements to this track.

– Notice how they’re able to keep interest through the track: The build, then the middle, spacey section, then the reprise.