I got the opportunity to provide the music for All About Feelings, a LeapFrog learning game for 3-5 year to take photos, play activities and draw about emotions. 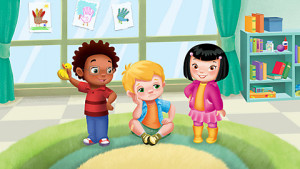 Click here to watch a teaser video featuring my music.

diagetic or source music – source is visible on the screen or whose source is implied to be present by the action of the film:

non-diagetic – source is neither visible on the screen nor has been implied to be present in the action:

Non-diegetic sound is represented as coming from the a source outside story space.

Mickey Mousing – hitting action in time, and usually in rhythm as in cartoons

Spotting – deciding where the music goes – where it starts and stops

playing with the action on the picture– the music supports the same mood or theme as the picture, accompanies, enhances

(vs) playing against – the music plays a different mood, for a specific dramatic effect

underscore – or background score, the music that supports the movie. as a composer it’s probably a good idea to remember that your music should support the film – your music wouldn’t exist without it!

Leitmotif/Leitmotives – a theme or instrument associated with a specific character

A very early example of a film that has almost all of these definitions: